Welcome to Stanly Ranch. Would you like a glass of wine to take to your room?”, chirps the concierge. I slide my sunglasses down my nose, pausing in front of the lobby desk to check if this guy is serious. Sir, do you think I’ve come all the way to Napa Valley for the water? A glass of white is pressed into my hand and I’m whisked into the California sunshine, past the resort’s blooming lavender and wildflowers buzzing with hummingbirds. My timber villa appears ahead along a winding path, looking as fresh as the surrounding planting — I’m at the latest plush addition to this swanky wine region.

Napa Valley is America’s best, and its most exclusive, wine region for tourism. It is arguably also the world’s. You don’t come here simply to drink the award-winning chardonnay and cabernet sauvignon. Instead, you come for “an experience”. Architecturally glitzy wineries — lauded names such as Opus One, Inglenook and Stag’s Leap — host private tastings that blend phenomenal expertise with Disneyland smiles. Pretty towns are stuffed with galleries and Michelin-starred restaurants. The hotels? Lap-of-luxury stuff, where it’s not unusual to pay upwards of £1,000 a night for a standard room.

But, whether it’s driven by one-upmanship or visitor demand, there seems to be a hunger for more. Two signifiant new luxury resort openings — one at the region’s southern gateway and one at its northern end — show that, for all the existing excellence, there’s no resting on laurels in Napa Valley. Stanly Ranch, in the south and just 50 minutes from San Francisco, is the newer of the two, having opened in May. It’s part of the rapidly expanding Auberge Resorts Collection — a luxury American group that started right here in the Valley in the 1980s. Its pioneering property in Rutherford, Auberge du Soleil, is still a cracking stay, with Provençal decor and a restaurant overlooking the valley. But while it has an old-world, hideaway vibe, Stanly Ranch is very different.

Set across more than 700 acres in breezy Carneros, it’s more relaxed, more social, more modern — more, well, Californian. Auberge calls it a “new generation Napa experience”, designed for longer stays and even for families. It’s inspired not by France but by the surrounding land, specifically the property’s history as a vineyard and cattle farm in the 1800s, when it was owned by a Judge Stanly.

My room, in one of the resort’s many barn-like villas, is a minimalist’s dream: soaring ceilings and floors coated in warm woods; hand-knotted rug patterns inspired by the Valley’s indigenous people, the Wappo; earthy ceramics. It’s all just the right side of ranchy; there are token farmyard hints such as a sheepskin throw, cream-coloured quilt and barn panels lining an outdoor shower area, but the sleek egg-shaped tub, electric fireplace and statement lighting keep the aesthetic from becoming Old MacDonald.

I discover my favourite feature just after I’ve dropped my bag and raided the local-goodie-stocked minibar for another glass of vino. It’s the firepit on the terrace, with comfy seating overlooking my own personal plot of infant grape vines — close enough to reach out and touch. If I didn’t feel like I was in Napa Valley before, I sure do now. 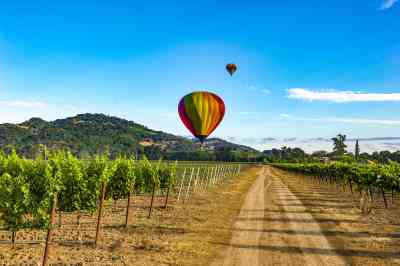 An hour later I’m passing more freshly planted vines, touring the grounds with Melissa, the on-site marketing manager. She tells me the grapes may go into a Stanly Ranch wine in the future — though nothing is yet official — and points out a giant barn overlooking the property, a heritage feature from the ranch, emblazoned with huge American and Californian flags. It’s a natural Instagram focal point — though it has competition from a massive new steel sculpture, Infinity, sited across from the barn at the highest point of the resort.

As we walk and talk, it becomes clear that while it is early days, there is ambition for Stanly Ranch. Beyond the larger of two suntrap pool areas — this one complete with cabanas, a bar and children’s play areas — Melissa shows me the on-site residences being constructed for private sale (yours for just £3.5 million). Like the café and shop, which sells knitted “Stanly Ranch” jumpers for £350, activities such as yoga and artist talks are designed to foster a local community. As is the Bear restaurant, which — as I discover later — has some of the Valley’s most exciting food. I devour hamachi with chilli, chewy fried rice balls and grilled harissa chicken accompanied by a fiery sunset.

Stanly Resort reflects the changing face of nearby Napa city itself. It seems like everyone I encounter over my five days in the Valley feels that this county capital — formerly a dull gateway south of the more popular tourist towns of Yountville and St Helena — is changing. Oxbow Public Market is now crammed with cool places to eat. Trendy tasting rooms like the one at Ashes & Diamonds Winery are cropping up, pouring modern, fresh wines. Even celebrated chefs such as Philip Tessier, who recently took the helm at Press in St Helena — perhaps the Valley’s hottest restaurant, 20 miles north of Napa — has eyes on the scene. “People have asked when I’ll open a place in downtown Napa,” he tells me one night after I’ve polished off his ricotta gnudi wrapped in delicate, translucent squash blossom.

But for all its other draws, the vast indoor-outdoor spa is perhaps Stanly Ranch’s greatest enticement. The next morning I install myself by the adults-only pool and spend a few hours “researching” the offering, hopping from yoga session to hot tub overlooking the hills, then wallowing in a whole new building dedicated to thermal wellness (its window-lined cedar sauna, I suspect, is large enough to accommodate my entire extended family). I finish with a massage, executed to a soundtrack of sheep gently bleating over low clubby beats. I have hit peak Stanly Ranch. The pool at Four Seasons Resort and Residences Napa Valley

Spa-ing is also a big draw at the other big opening of the past year: Four Seasons Resort and Residences Napa Valley. Forty minutes’ drive up the Valley from Stanly Ranch, in the sun-baked northern reaches, this is a whole other landscape. Soaring mountains dotted with trees; flat Valley beds carpeted in vines. Unlike Napa city, where the landscape is more open and suburban, here you feel like you’re deep in rural, quaint wine country.

Not that the Four Seasons is quaint; the lobby’s oversized art installations establish that much on arrival. Bordered by established vineyards and replacing a former inn, it is, though, by necessity, more compact than Stanly Ranch. Its farmhouse-chic rooms, spread across two-storey buildings, are dressed in contrasting white and slate grey, with fireplaces and terraces. Most face towards a sizeable pool and lawn area in a classic resort configuration. The rooms with most privacy have views off to the sleepy Palisades mountains — as does the Talisa spa, which features mineral-rich Calistoga mud among its treatments.

The native Wappo people — whom the Four Seasons acknowledges subtly throughout via the decor, along with the area’s Mexican-American farm workers — were the first to use mud treatments here in Calistoga, mixing the volcanic soil with natural mineral waters. After the gold rush, the idea took off commercially and these days the town’s compact centre is filled with mud spas.

And so it is on a 38C afternoon that I find myself baking beneath a layer of self-applied black goop on the outdoor terrace of the Four Seasons spa. No one else is about, the loungers are pristine, and I am trying very, very hard not to get anything — actually, everything — covered in muddy prints. A farmhouse villa at the Four Seasons

It’s not going well. I’d blame the superb massage from magic-fingered therapist Patricia for my clumsy, zoned-out state but I suspect the real cause is my morning “tastings” at Chateau Montelena (the winery from the film Bottle Shock) and Tank Garage Winery. Both are just a five-minute taxi from the resort (or, for the sober, a short ride away on free-to-borrow hotel bikes). I think that at this precise moment my blood is approximately 50 per cent cabernet sauvignon.

And there’s more cabernet to be had. Besides its spa, the most exciting feature about the Four Seasons is that it shares the space with a real working winery. Nearly five acres of vineyard — much of them overlooked by guest rooms — are accompanied by a full tasting room and cellar. One of the bedrooms at the Four Seasons

“These vines were planted before the Four Seasons was even built,” the winemaker Jonathan Walden says as he walks me past the rows, explaining the years of planning that have gone into the launch of Elusa Winery. The aim is to make best-of-the-best cabernet sauvignon, ageable for 20 or 30 years, while giving guests the chance to try a “library” of vintages when they book in for a tasting. To add further heft to the project, Napa winemaking guru Thomas River Brown has been consulting on the project for nearly a decade. A vineyard in the Carneros Valley near Napa city

As we settle into leather chairs in the winery’s tasting room and sample the 2013 bottling, I can appreciate why people bang on about older cabernet sauvignon. It’s richly fruity and smooth, but complex and lively too — and nowhere near reaching the end of its development. Under its broody influence, I almost buy some; though I manage to resist temptation when I learn it costs £150 a bottle. After nearly a week of wine tasting in pricey Napa Valley, I’m not sure my bank balance can take the hit.

But then, another thought hits me like a tonne of bricks. How on earth am I going to get the other dozen bottles I did buy back to London? Chichi Yountville is perhaps the Napa Valley’s most picture-perfect town, and home to three-Michelin-starred Thomas Keller restaurant the French Laundry. Among all the quaint Americana — landscaped gardens, bakeries, general stores — this dramatic contemporary spa resort in a building with building with outstanding eco credentials. Spa suites in creamy tones have private outdoor plunge pools, and therapists come to you so that your exfoliating grapeseed body polish takes place in privacy. Meanwhile, the on-site restaurant, Lucy, plates up green goodies — like peas and lettuce — from the hotel’s own organic garden.
Details Room-only doubles from £1,172 (bardessono.com) 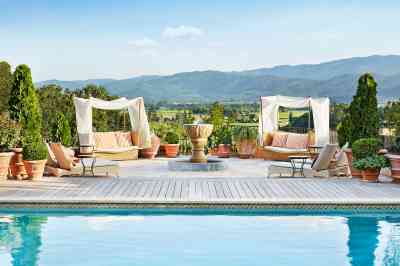 It started life as Auberge, a fine-dining French restaurant in Rutherford back in 1981, when Napa’s tourism scene was still in its infancy. But before long this rambling plot overlooking the olive groves was transformed into one of the area’s finest places to stay. There is still top-notch Gallic-inflected food — made with fresh Californian ingredients — and a superb roster of local cabernet sauvignons to match with it. The views from the spacious rooms, dressed in a Provençal palette, are good. Those from the restaurant are great; those from the frothing outdoor hot tub in the rambling spa are sublime.
Details Room-only doubles from £1,177 (aubergeresorts.com) 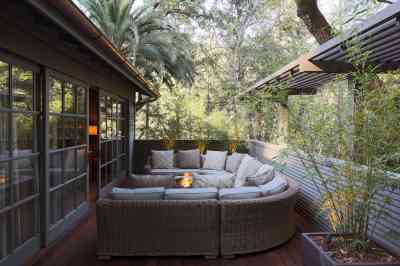 This longstanding favourite was badly damaged in 2020 by forest fires — its three-Michelin-starred restaurant was a notable casualty — but Meadowood has reopened and is again welcoming guests to its 250 acres. Make for the impressive cellar, open for guest-only tasting experiences; a one-to-one with a sommelier will teach you the proper way to taste wine and help you discern the differences between Napa cabernet vintages. Families will love the multiple pools, tennis courts and hikes leading to panoramic views over St Helena. Rooms? The 36 currently open are spacious and homely, in classic wine-country style.
Details Room-only doubles from £795 (meadowood.com) 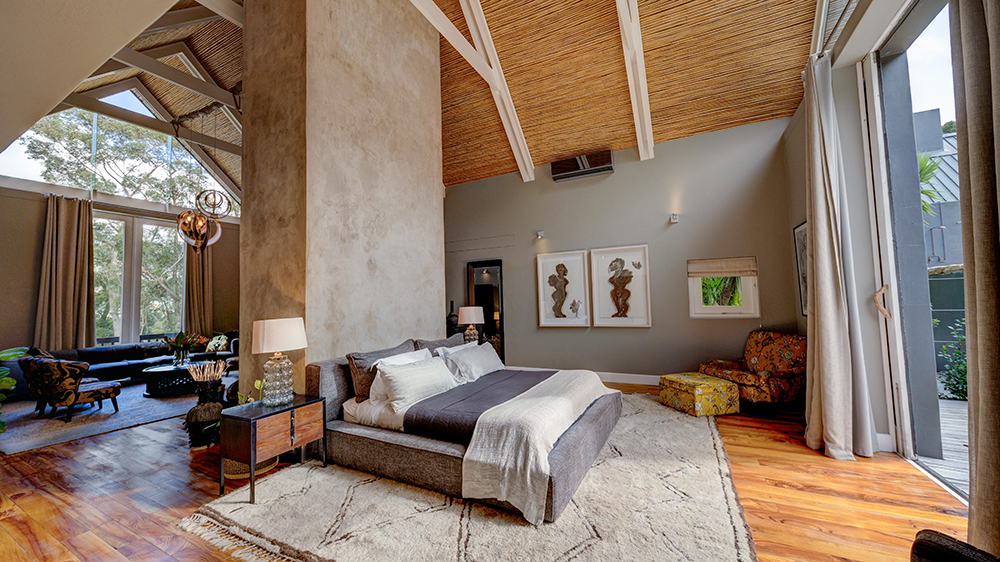